What a fun journey it has been.  During all of the crazy and overwhelming times, and believe me, there are many, I am overcome with emotion when I think about the fact that this journey I am on, this very journey that is nearly killing me, is absolutely everything I ever hoped it would be.  And for that, I am so very thankful!  Once upon a time, in a land far, far away…..  🙂

The Journey to Now 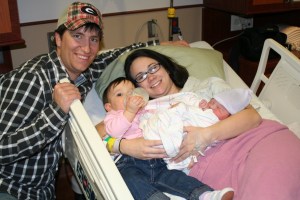 During the long two years from starting to try to get pregnant to miscarriage to not being able to get pregnant to finally Sydney, I would have never made it without all of the blogs of other people who were either going through what I was, or who had already gone through it and finally had a baby! Our story was so crazy, I always said I would need to post it for others looking for answers!

It started off like every other young couple who’d decided to try to start a family! January 2007.. off the pill! I hadn’t graduated nursing school yet, so I lied and told everyone we’d get pregnant in June. Well, we did. And at 6 weeks, we lost that baby. Not so desperately traumatic, we’d just try again. Well, months, and months went by with no baby! I actually stopped having periods. (Sorry if this is TMI, but this is for all those TTC and looking for hope!) I had to have a period induced with progesterone and then take Clomid to ovulate. Which, I did for 5/6 months you’re allowed to take Clomid. Hot flashes. Mood swings. AWFUL! I couldn’t take it any more, so I stopped taking Clomid and I also stopped eating transfats, stopped drinking caffeine, worked out, took Gerritol (A baby in every bottle!), went to a foster care meeting, and had an appointment w/ fertility doctor!) In the midst of this horribleness– every person I’d ever been friends with got pregnant (or so it seemed!) And even every celebrity who couldn’t get pregnant before– J.Lo, Halle Berry, Nicole Kidman– did! So, I stopped Clomid because I was miserable. And then I still had no period! What was wrong with me?! Negative pregnancy tests. Dr. actually wanted to send me to infertility specialist at 22 years old— without doing any tests first.
So, Ben and I went to get a second opinion from that same office (there were 5-6 OBGYNs there) aobout why I wasn’t starting/ovulating. Hypothyroidism? Stress? Body confused from the miscarriage? We had several theories, but pregnancy wasn’t one of them! So they did a urine pregnancy test at the beginning, and then we meet with the doctor who is telling me all the things that could be wrong (including I’ve gained 5 lbs, “maybe it’s that extra weight”!!) Then the nurse walked in and said that I had the faintest positive test she’d ever seen. So they sent us to the hospital for a blood test and it confirmed I hadn’t started because I was pregnant! We were in absolute shock! It was a terrifying pregnancy because every second of it, I was worried something would go wrong. I don’t think I lost that feeling until I was finally holding her in our postpartum/mother-baby room. But, January 15, 2009, the worst 2 years of my life finally came to an end and the rest of my life started!!
Little did we know, God had funny plans for us. He quickly helped us make up for lost time! When Sydney was just a few days shy of 5 months old, we found out that we were expecting again! And at 1 year and 3 weeks, Sydney became a “big” sister to baby Eli! How quickly life can change!! 🙂

Looking forward to posting adorable pictures and funny stories about my crazy family that I love so much!

We are a family striving to crush the cookie cutter, on all fronts. We are Mommy and Daddy to 3 kiddos who are equal parts crazy and beautiful, Sydney (8), Eli (7), and Liam (4). Continually trying to find balance in life, but mostly just really thankful for those who help be part of our village in our chaos! Newly navigating the waters of ADHD, but amazed at the progress we’ve made so far. Advocate for The I-58 Mission, supporting those whose voice might otherwise not be heard. Part of the amazing team of believers at Southside Church. Nurse Practitioner at a corporation that’s been there for me since the beginning of my career. Blogging to fulfill a need I have to share my heart through words, and hopefully help a few hearts along the way.