So, fidget spinners are suddenly all the rage in our little town, and lots of little towns, I suspect.  My kids both came home from school about a month ago insisting that they must have one NOW.  I laughed at them, told them they had been on my Amazon wishlist for months, and no way, they did not NEED them NOW.

Because I am not a teacher, whose classroom has been disrupted by 20 little people whose hands and minds are suddenly occupied by spinning objects, I don’t hate fidget spinners.  Have you tried them?!  They’re actually quite fun, and quite good at the purpose for which they were created.  But, I totally get how they would be a distraction in a classroom as well.

The spinners are marketed for kids/people with ADHD and Anxiety, and equally as a person with these things, a mom to kids with these things and a nurse practitioner, I agree that they can be beneficial for both.  Often fidgeting is a huge part of anxiety- ya’ll, I actually remember in high school youth group thinking “I am so nervous about singing (not in front of people, just WITH people), so I will twist my watch over and over.”  Other people chew on their nails (or their clothes), twist their hair, wring their hands, constantly look at their phone, etc.  Insert fidget spinner, and the hands and the mind are occupied with something more socially acceptable than chewing on your shirt-sleeve.

One of my ADHD kiddos would have done better in class with a fidget spinner and the other worse.  Sydney would have been so distracted by it and hyperfocused on it, that it would have completely made her forget that she had actual work to do (which is, I suspect, why teachers hated it, as most of their class probably had similar reactions!)  Eli, however, would have really benefited from it, and was the reason it, among other cool contraptions (see below!), were on my Amazon wishlist!  Often hyperactivity is not the typical “wild child” that you think of.  Often it looks more like the need to constantly move— kicking feet, tapping hands, shredding paper (or anything else you can destroy– paper, pencil erasers, etc.).  THIS is where the fidget spinner could actually be helpful to kids who have this constant need to move, and be able to exist in a classroom without being a distraction.  As a matter of fact, would likely replace behaviors that were already a distraction, like tapping the desk, kicking feet, or humming. 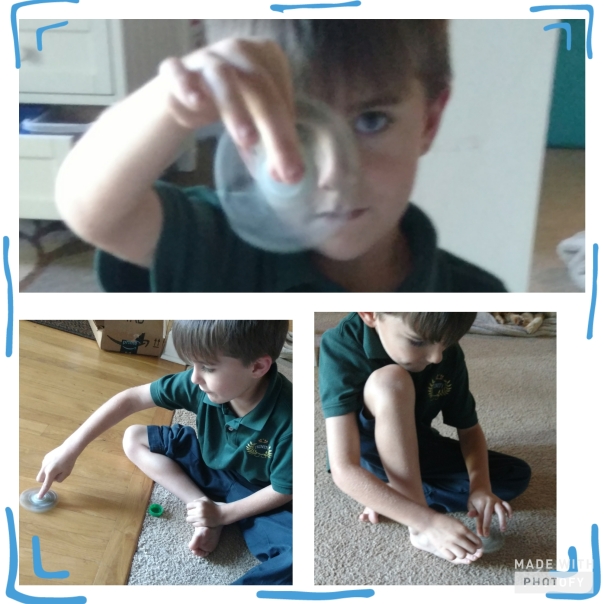 Unfortunately the creators of these cool little tool/toy did not take into consideration that the population to which they were marketing (ADHD/Anxiety, etc.) are often chewers by nature.  It only takes a quick google search to find tons of news stories about kiddos choking.

So, I think they are pretty cool little toys, but amid the safety concerns with choking hazards and lead levels, I definitely think they should be monitored, used in moderation, and not sent to school.

Some other super cool things that are also helpful are:

Do you have any amazing products that have helped your kiddo that doesn’t fit the cookie cutter?  I would love to hear about it!

1 thought on “Fidget Spinners.. love them or hate them??”

We are a family striving to crush the cookie cutter, on all fronts. We are Mommy and Daddy to 3 kiddos who are equal parts crazy and beautiful, Sydney (8), Eli (7), and Liam (4). Continually trying to find balance in life, but mostly just really thankful for those who help be part of our village in our chaos! Newly navigating the waters of ADHD, but amazed at the progress we’ve made so far. Advocate for The I-58 Mission, supporting those whose voice might otherwise not be heard. Part of the amazing team of believers at Southside Church. Nurse Practitioner at a corporation that’s been there for me since the beginning of my career. Blogging to fulfill a need I have to share my heart through words, and hopefully help a few hearts along the way.